The Scots Church ‘Leaflet’ magazine for June 2019 is now available online and it has some interesting content in relation to the history of the Ferguson & Urie stained-glass company of North Melbourne.

Page eighteen of the Leaflet includes an article by Rosalie Strother, the magazine editor, titled;

“Ray Brown – A Descendant of James Ferguson and his work in Historical Preservation”.[1]

The front cover includes a portion of the Ferguson & Urie companies magnificent four-light stained-glass window that faces iconic Collins Street. This historic window depicting eight episodes from the Gospels was granted its own Heritage Classification in 1992[2] and was donated by the wealthy squatter Sir Samuel Wilson in 1876[3] at the cost of £450[4].

I recall that back in about 2009 this window was one the first specimens of Ferguson & Urie stained glass I had ventured to see based on my fledgling research notes. I didn’t know exactly what I was looking for at the time as my only clues mentioned something to do with the “Parables”, also referred to as the “Episodes from the Gospels or the “Teachings of Jesus”.

I wandered up and down the nave of Scots Church randomly looking at the stained-glass windows with no specific clue on the biblical scenes that it may contain and there was also no mention of anyone named Wilson in the dedication border on the windows or the brass plaques below them. Eventually I asked a lady who was collecting the bibles from the pews if she knew of a window depicting something to do with the ‘Parables’. Suffice to say that the look on her face was priceless. It was duly pointed out to me that the window I was looking for was the huge four- light window in the liturgical west wall of the church facing the Collins Street end. You would have to be blind not to notice it. I was dumbfounded and astounded! My immediate thoughts were that if Ferguson & Urie had created a stained-glass window of this magnitude then there must certainly be more of their work to be found as well as much more to the history of the company than I had only found briefly mentioned in a handful of publications. 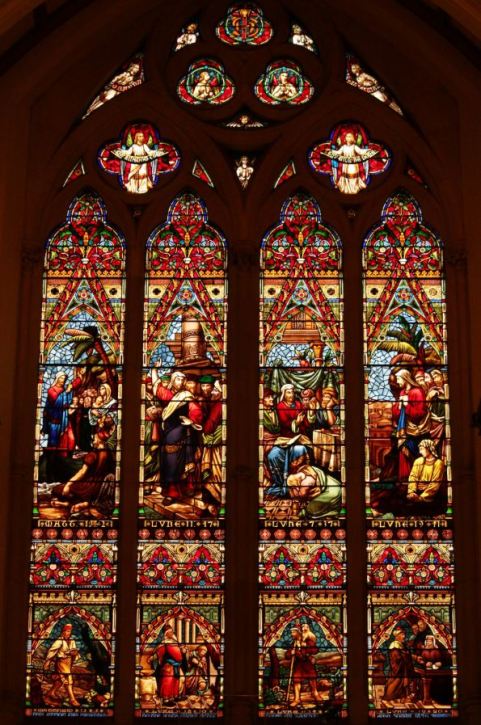 My original post about the two largest Ferguson & Urie stained glass windows in Scots Church can be seen here: http://wp.me/p28nLD-pW

Fast forward to 2019 and I’ve managed to compile a significant dossier about the company, most of which I have published here on this web site.

Page eighteen of Scots Church’s magazine ‘The Leaflet, No.1076, June 2019’ is probably the most unusual in relation to the history of Ferguson & Urie. Rosalie Strother is the Editor of ‘The Leaflet’ and in this edition of the magazine Rosalie has included a biography of me and my research of the company between their inception in 1853 and their demise in 1899.

Rosalie’s article is an interesting read to see how the Ferguson & Urie company history became my research obsession as a result of a simple family history project that spawned a whole new previously unwritten history about Ferguson & Urie and their stained glass windows.