The foundation stone of St John’s Anglican Church in Ballan was laid by Juliet Vivian Lyon (nee Anderson) in 1861. Thirteen years after that historical event Juliet died and in late 1874 a stained glass window was erected in her memory in  the chancel of St John’s. The window was made by the Colonial stained glass craftsmen Ferguson & Urie of North Melbourne.

Juliet was born at Norfolk Island on the 10th Feb 1839, the daughter of the decorated army officer Joseph Anderson (1790-1877) and Mary Campbell. Her father Joseph was was stationed as commandant of the Norfolk Island Penal Colony from March 1834 to February 1839. One of his first duties on Norfolk Island was to dispense the punishment for the Norfolk Island Prisoner revolt in 1834 in which thirteen of the twenty-nine convicted prisoners were executed.

In 1861 Juliet had the honour of laying the foundation stone of St John’s Anglican Church in Ballan. Very little information is known of this event other than Juliet had laid its foundation stone as mentioned on her memorial stained glass window, and the obscure mention that on the 29th January 1862 the Church was reported as being near completion[3].

Juliet died at her father’s residence ‘Fairlie-house’ in South Yarra on the 16th of March 1874, aged 35[4]. She was buried with her parents, Joseph and Mary Anderson, in the St Kilda cemetery on the 17th March 1874 and her husband Hugh was also buried them in 1905.

The Ferguson & Urie stained glass window was erected to her memory in St John’s, thirteen years after she had laid its foundation stone.

Across the base of both windows is the memorial text:

‘IN MEMORY OF JULIET VIVIAN LYON WHO LAID THE FOUNDATION STONE OF THIS CHURCH IN 1861.’ 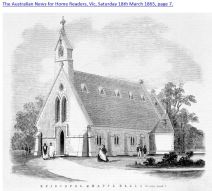 The neat little building, shown in the engraving, is the newly erected Episcopal Chapel, at Ballan, a distance of about sixty miles from Melbourne. The building has been raised solely by the exertions of the congregation, and is a pleasing instance of the progress of Christianity in the provincial districts of Victoria. The chapel belongs to the Gothic order of architecture, and is commodious enough to meet the requirements of the Episcopalians of Ballan. The nave is 57 feet by 25 feet in extent, and chancel 10 feet 3 inches by 21 feet.”

In the historical engraving depicting St John’s from 1865 it shows  a ‘Pugin’ type bell-cote at the west end and a small side building at the east end which is presumably a vestry. Neither of these exist to this day.

The left lancet of the Ferguson & Urie window which depicts ‘Faith’ is taken from a famous oil painting by Sir Joshua Reynolds (1723-1792) and replicated in a stained glass window by Thomas Jervaise at Holy Trinity, Fareham, Hampshire, England. There are three other known instances of this depiction of ‘Faith’ in Ferguson & Urie windows which are located at All Saints, South Hobart; Christ Church, Hawthorne; St Mark’s, Remuera, New Zealand.