“DEATH OF MR. JAMES URIE.- The above gentleman died on the 22nd, at his mother’s residence, “Glencairn,” Wellington-street, Kensington, of consumption, after an illness of about twelve months’ duration. The funeral took place on Monday, and was largely attended. The Rev. Mr. Taylor, Presbyterian Minister, of Flemington, officiated; and the bearers of the coffin were the deceased’s fellow employes – Messrs. J. Scott, C. Hardess, F. L. [sic] Lording, J. Murdoch, J. Auld, and E. R. King; the pall-bearers being J. Ferguson, A. Young, P. Gunter, D. McPhail, A. Nathan, and J. M. Gilligan. Mr Urie was only 26 years of age at the time of his death; and was generally liked owing to his kind and urbane disposition. Amongst the many floral tributes was a beautiful one sent by the employes of the firm of Ferguson and Urie. By a strange coincidence Mr. Urie’s uncle, Mr. J. Yeaman, died the same day, at his residence, which adjoined that of his nephew, and was also buried on Monday. Mr. Yeaman was 68 years of age. Great sympathy is felt on all hands for Mrs. Urie and the other members of the bereaved family. Mr. Alfred Allison, of Victoria-street, West Melbourne, carried out the funeral arrangements”. 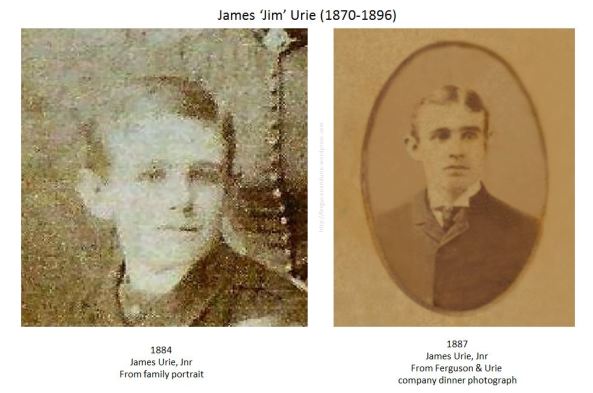 James ‘Jim’ Urie and his uncle John Yeaman both died of  Tuberculosis, coincidentally, on the same day. They both lived in close proximity to each other and it was a highly infectious disease. The coincidence is that they both happened to die on the same day. His uncle mentioned as ‘John Yeaman’ also accompanied William Urie (Jim’s elder brother) to England in March 1888 as described at The 1888 Ferguson and Urie Company Dinner.

Other names mentioned at the funeral:

J. Auld – James Auld (1873-1945). Grandson of James Ferguson Snr (1818-1894).
James Auld left Australia for New Zealand c.1898 and later formed the partnership of “Auld & Gleeson” glaziers in Wellington. Prior to this article, it was only a theory that he gained his skills in the glass trade with his grandfather James Ferguson at ‘Ferguson & Urie’.